The United Way Guelph Wellington Dufferin sees a big need, and it is setting a big fundraising target to meet it.

The charitable organization gave $2.7 million to over 90 programs for 2016, and will shoot much higher for 2017, revealing a goal of $3.6 million during an announcement Thursday.

The announcement was to have taking place on the roof of Skyline Group of Companies on Douglas Street in Guelph’s downtown, but high winds and rain scuttled that idea. Skyline, a new sponsor of the campaign, hosted the launch in the spacious basement of the building. 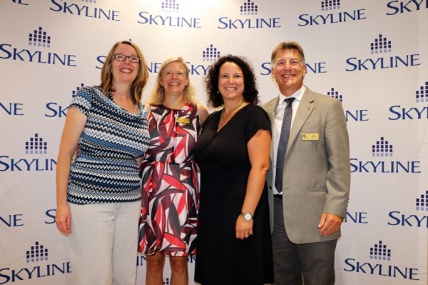 The United Way is aiming for new heights, and dozens of local companies and organizations are set to launch in-house campaigns to support the campaign.

Guelph Mayor Cam Guthrie has faith the target can be surpassed. He said the campaign is a long one, and he encouraged everyone to keep going and keep motivated to reach their personal or organizational goals.

“You should think about the end result, and the story of the life that’s changed – the story of the mom, the little boy or little girl that is helped, or the organization that finally got something together that is able to create a ripple effect across the community and make a difference,” the mayor said.

“I’m going to dig a little bit deeper,” he added. “I think we can all go beyond a little bit this year. Let’s see if we can push it beyond what we would normally do.” 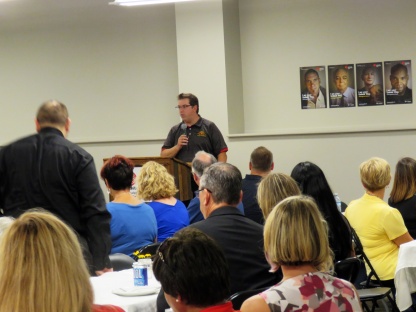 Rick McCombie is this year’s campaign chair. The organization supported 92 programs offered at 57 local agencies in 2016, he said, and it needs the entire community to pitch in to ensure that support continues. Giving, he indicated, is an act of living.

“The United Way touches everyone in our community,” he said. “The campaign is a time to come together, where business, community leaders, and individuals come together to support their community and give back, and support those vital social programs that we need.” 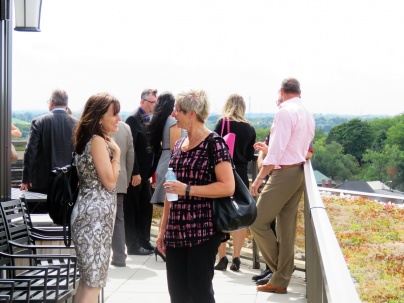 “There’s a lot of needs in the community, from food pantries, to youth shelters, to senior’s programs, and we’ve got to keep those going,” he said.

The Guelph and area community has always rallied to support the United Way, he added.

“They know that their dollars are staying local, helping local charities,” he said. “They also know that with every dollar donated, the United Way really does know where to put those dollars to have the greatest impact.”

Jason Ashdown, Chief Sustainability Officer of Skyline, said his company was eager to support the United Way because the organization supports a number of charities that the company has long supported. He thanked the United Way for its donations to the charities that are near and dear to Skyline's heart - including Big Brothers Big Sisters of Guelph, Shelldale Better Beginnings, Better Futures, and the Children's Foundation of Guelph & Wellington.

The over 90 programs funded by the United Way support numerous complex social issues, including poverty, homelessness, mental health, and literacy. The campaign runs until the end of November.

Donations are accepted at workplaces across Guelph, and in Wellington and Dufferin counties, and through the United Way office at 85 Westmount Road. Call 519-821-0571 or visit www.unitedwayguelph.com.